Huoy Meas, the Most Popular Cambodian DJ in the 1960s​

Huoy Meas was a Cambodian singer and radio announcer in the 1960s and 1970s. She was born on January 06th, 1946 in Svay Por commune, Sangker district, Battambong province.

She won first place in a singing contest in Battambong province, and everyone was amazed by her beautiful voice. Later that year, she failed her grade 12 national exam and her senior, Im Song Seum, took her to show her talent through a provincial band. 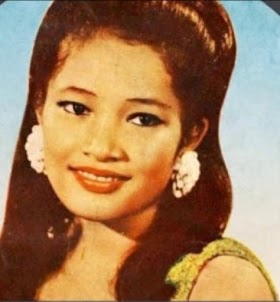 A photo of Mrs. Huoy Meas

Her career/family
When Huoy Meas first arrived at Phnom Penh in 1965, she joined The National Radio station as an MC, acting as a commentator on contemporary songs, voice actors, etc. As her singing career, she always paired up with her senior in singing. A few months after her arrival in Phnom Penh, she got married to Oum Sophanurak and had a daughter. However, their marriage lasted for three years because they did not get along well. They had arguments and led to violence. However, Mr. Sophanurak loved her yet he was too jealous whenever she was closed to another man, causing the mess in their marriage and leading to divorce.

In 1969, she was married to Vanly Kesaro, a high-ranking officer, who used to secretly love her. Their marriage went well. In addition to her career, sometimes she was grouped with Mrs. Pan Ron and Mr.s Ros Sereysothea to sing songs together and sometimes was paired with Mr. Sin Sisamouth or the three of them paired with him. She also acted as a judge, along with Sin Sisamouth and many other professional singers, in the public song contest, called Samach Cheat, which was established by Prince Norodom Sihanouk.

Also, she was known as the most popular female radio Dj in Cambodia working at the National Radio station. She was promoting Cambodian rock and pop music and did her own singing. Even Prince Norodom Sihanouk compared her lyrics and singing style to Mrs. Edith Piaf,  the greatest popular French singer, because most of her melancholy lyrics were about her own life. Her most popular songs included “Samros Borey Tioulong” and “Unique Child”.

In the 1970s, Mrs. Huoy Meas disappeared during the Cambodian genocide, the Khmer Rouge region. There was no actual confirmation about her disappearance, but she was believed to have been evacuated from Phnom Penh to the rural areas like many others.

COVID-19: Cambodia Reports No Confirmed Cases for Ten Consecutive Days in A Row